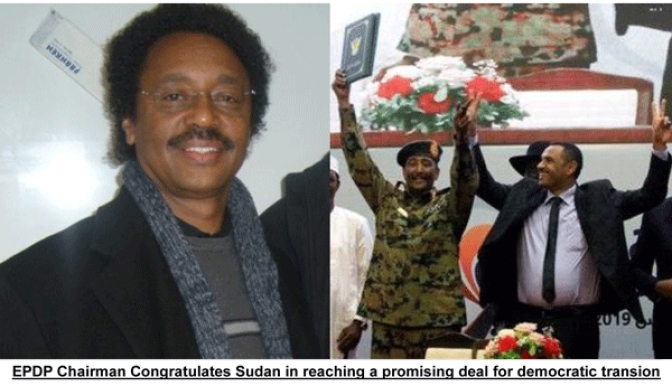 Mr. Tesfai Woldemichael (Degiga), the newly elected chairman of the Eritrean People’s Democratic Party (EPDP), on 19 August sent a congratulatory message to the people of fraternal Sudan expressing “boundless joy and hope” of many Eritreans for Sudan’s success in reaching “a promising deal for a smooth transition to democratic governance.”

Addressed to General Abdel-Fattah A. Burhan, head of the military council, and Mr. Ahmed al-Rabie, the representative and signatory of the agreement on behalf of the civilian coalition for democracy and change, the message emphatically stated that the agreement reached between the two sides in the Sudan is “both historic and  exemplary pact that many friends of the Sudan, including Eritreans, aspire to have for their own peoples.”

The EPDP Chairman did not hide the fact that Sudanese authorities in the past were mostly on the side of the unrepresentative regime in Asmara but that he now hopes that the New Sudan  “will open its doors for us in the opposition - “the other Eritrean- and discuss how the Sudanese people can help change the situation also in neighboring Eritrea.”

Reprinted below is the full message of the EPDP Chair to the Sudanese people and government.

Mr. Ahmed al-Rabie, Representative of the Alliance of Civilian Forces for Freedom and Change, Khartoum Sudan

On behalf of the Eritrean People’s Democratic Party (EPDP) in exile and all its friends and sympathizers at home and in diaspora, I am deeply pleased to convey to you and through you to the people of fraternal Sudan the heartfelt congratulations for your joint success to reach a promising deal for a smooth transition to democratic governance in your country.

Believe me, Sirs, we in the EPDP, a mainstream Eritrean party struggling for a similar democratic transition in our country, and other pro-democracy Eritreans everywhere, are today sharing the boundless joy and hope being expressed by our brothers and sisters in the Sudan. We have been keenly and anxiously following the developments in the Sudan since the very start of the People Power movement which is now being crowned with success.

The document for the transition agreement that you signed on 17 August 2019 is both historic and an exemplary pact that many friends of the Sudan, including Eritreans, aspire to have for their own peoples.

Yet, we also wish to call on all friends in the Sudan to work hard in the years to come in order to guarantee a long lasting success of this hard-won victory, because, as they say, the devil could always be in the detail.  In the meantime, we remain trustful that, after so many ups and downs, democracy and the rule of law in the Sudan will finally be a reality.

We in the EPDP have been trying to reach the former authorities in the Sudan through a chain of memoranda addressed to the Foreign Ministry, the Head of State and through Sudan’s Permanent Mission in the UN, but to avail. As you can consult their archives, no responses were made to our earnest appeals to understand the sad situation inside Eritrea and the endless suffering of Eritreans in forced exile. Although this is not the occasion to dwell on this issue, Sirs, we sincerely hope that the new Sudan will open its doors for us in the opposition - “the other Eritreans” - and discuss how the Sudanese people can help change the situation also in neighboring Eritrea. 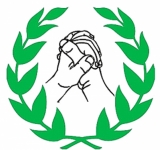 Ms Adiam Haile Rufael from the USA, one of the youngest newly elected Central Council members of the unified EPDP, stressed in her address at the main Festival Panel in Frankfurt on 3 August 2019 that hadnet /unity in the opposition camp and wudeba/organized action are the sure pathways to speedy victory against the repressive regime in Eritrea.

Speaking in English, interspersed with her favourite phrases in Tigrigna, young Adiam drew the attention of the festival audience by calling for a fast and renewed action for change based on knowledge and self criticism. She added: “to be fair, all blame cannot be laid on the regime [in Asmara]; we must own our faults as well.”   Unmistakably, she was referring to the unending bickering among all justice seekers, old and new.

Further emphasizing her call for unity and the importance of belonging to or building one’s own strong organization, Ms Adiam Haile said: “We are fighting against an organized political regime that has been able to stay in existence for so long due to our lack of doing what we have begun to do at this Congress together - [unity].”

She criticized some of her generation members who still believe that they should not join organizations led by “the old generation.”  Adiam went on advising her generation: “We must not allow ourselves to be fooled into this divisive political propaganda” which she said is being used  enemies of the struggle for change in order to keep it fractured. Talking about herself, she said she enjoyed working with senior members of the opposition camp “who have been through the struggle and understand Eritrean politics like no other.”

A long-time activist in the social media, Adiam also addressed a plenary session of the 3rd and Unity Congress held in Wiesbaden, Germany, between 29 July and August 12019 in which she expressed her optimism about the example being set by the unity

attained  between the Eritrean National Salvation/Hidri and the EPDP. She also praised the sacrifices everybody made on his/her own to be at the unity congress from faraway places like Australia and remote parts of the USA and Canada.

Elected receiving  the highest number of democratic votes attainable at the congress, Ms Adiam Haile Rufael will soon be assigned a number tasks as member of the 35-member Central Council of the unified party, the EPDP.

This year’s Eritrea Festival in Frankfurt was once more honoured by the presence of long-time friends of Eritrea from Sweden: 94-year old Journalist Bo Bjelfvenstam, who visited Eritrea in the 1960s, and Christina Bjork who joined his team in the 1970s for repeated visits to liberated areas carrying lots of support to needy Eritreans in the countryside.

In her nostalgia-filled inspiring address to the main Festival Panel on Saturday, 3 August, Christina spoke on behalf of herself and Bo. She lamented that Eritrea today “is an independent country, but not the country it could have been,” and hoped that the people will rise up and become masters of their long deferred dreams by dislodging the dictatorship and foiling those “who conspire in the background and prioritize their own power and wealth.”

Speaking about nonagenarian and still strong Bo, she said it was because of him that the Swedish people “understood that an unjust war was going on against the Eritrean people.” Bo wrote reports on Eritrea, produced films and TV programmes and a drama about the Eritrean struggle. He was probably the first Swedish journalist to interview Emperor Haile Selassie and ask him of what was going on in Eritrea!

Bo was among the Swedish citizens in 1970 that became part of a solidarity outfit called Eritrea Gruppen and asked young Christina to join it, which she did.

Christina Bjork herself produced in the early 1980s a film on Eritrea called The Land by the Sea. The English version of her resent book, Eritrea: A Classic African Dictator Took Over, was launched at Eritrea Festival 2019 and attracted many buyers.

Speaking about the book, Christina Bjork, who was appreciative of the dedicated struggle for democracy within the ELF, remarked: “the winner writes the history, but I wanted to hear the stories of those who belonged to the other side.” Hur ser deras historia ut ? However, her book contained not all what former ELF fighters had to tell but also included extensive interviews with former EPLF members.

She says: “They told me why they participated in the liberation struggle, how they were living in the liberated Eritrean areas during the war... aOch varför utvecklades Eritrea till en diktatur?nd why did Eritrea develop into a dictatorship?”

Mr. Tesfai Woldemichael (Degiga), the newly elected chairman of the unified Eritrean People’s Democratic Party (EPDP), expresses his deep thankfulness to all compatriots and friends who, through phone calls and various other communication channels, wished him success in the challenging post of leading one of the mainstream Eritrean opposition organizations.

In addition to the solidarity messages and warm wishes expressed by numerous delegates of sister Eritrean organizations that attended the 3rd and unity party congress in Wiesbaden and the Eritrea Festival in Frankfurt, dozens of friends sent messages of good wishes.

Veteran and patriotic leader Ibrahim Mohammed Ali told the new chairman on the phone, “Keep high the banner of our struggle for democracy and I know you will succeed!”

Reproduced Below, find excerpts from a sample of the well-wishing messages, some in  English and some in Tigrigna:

Ismail Ali Ahmed, an email via Harnnet.org: My heartfelt words of congratulation to brother Tesfai Woldemichael for assuming the well-deserved chairmanship of the EPDP. This is a man who possesses stature, experience and character to shoulder such high level responsibility at the top of an organization that aspires to play functional role in the affairs of a nation passing through critical travail to survive decades of subjugation under ruthless tyranny.

Abdurahman Sayed (Bohashem – on FB): Tesfai Degiga is  a veteran of the liberation struggle and one of the leaders of the on-going pro-democracy movement in Eritrean diaspora. He has a wealth of experience accumulated over five decades, and resilience manifested in his steadfastness through thick and thin that the pro-democracy movement has been going through in the last three decades. I met him on several occasions in the last ten years and found him to be humble, as is the case with his predecessors and comrades, and dedicated to the struggle for Eritrean salvation alongside his wife, who equally enjoys the same qualities of patriotic resilience. Many congratulations to Comrade Tesfai Degiga on his election as Chairman of the EPDP. I wish him and his comrades every success in their endeavours to realize civic democracy in our most beloved and precious State of Eritrea.

Seyoum Tesfaye, USA, on FB: Congratulations on your new responsibility! Allow me to wish you a very productive term. Your extensive experience and grasp of the present Eritrean reality will help all of us struggling to help our people remove the tyrannical system and usher in a new era of justice and freedom. Congratulation.

Miriam September, on FB: …. I respect EPDP and Mr. Tesfai Degiga because of their undeterred vision of peaceful resistance and change from inside Eritrea. Mr. Tesfai Degiga has a brilliant understanding of the immense benefits and power of non-violent resistance, which I was able to witness during a great presentation he gave. EPDP had a difficult stand in the opposition for believing in this vision, but stayed loyal to it and today, with the U-turns in Ethiopian politics and the revolution in the Sudan, this hugely important political strategy has finally become mainstream.