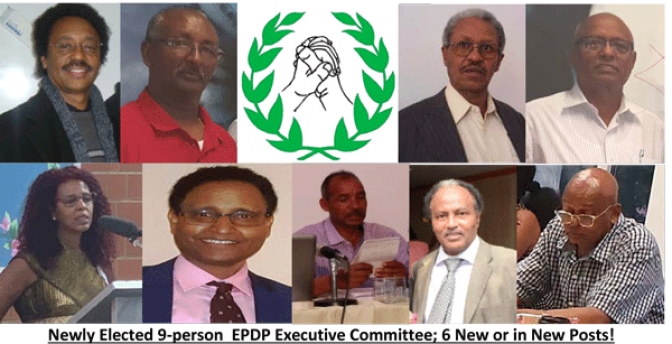 One of the worrisome and deeply entrenched bad habits and practices in Eritrean political landscape since a long time is the resistance of leading figures to leave office on time and without a problem. The Eritrean dictator, Isaias Afeworki, is one such bad example. As we all know, he has been in topmost position of power for 48 years since he created a political organization in 1971 that he always controlled, including during his unchallenged stay in power since 1991.

But can’t one say that the EPDP has already become an exception - a good example in changing that bad habit? Let us cite a few promising examples below.

The EPDP is now 10 years old. Within this short 10-year period, the party has managed to change four chairmen, including the recently elected one. Their names are shown in the caption to their pictures below.

In principle, the EPDP Constitution allows the Central Council to elect or re-elect party chairperson at every regular meeting which is held annually. The rest of the eight executive committee members are also elected or re-elected every year by the Central Council. This means that the Council can change, if it so wishes, party chairperson every year. On top of this, no one person can be allowed to be a candidate for party chair if he/she has already served two terms between congresses - that is, a maximum service of 8 years after being subjected to every-year scrutiny and re-election.

The 3rd and Unity Congress that was held  in July-August 2019  in Wiesbaden, Germany, has continued this tradition of fearlessness to renew the party and its leadership at all levels.

The Constitution allows a newly elected chairman to submit his candidates for each executive office and each person is voted by the Central Council separately. The Council, which itself is elected at congresses for a four-year term, can drop anyone of the chairperson’s candidates and can bring its own.

The new EPDP Central Council consists of 35 voting members and five non-voting reserve members who, however, have all the right to participate in leadership meetings and activities. Of these newly- elected 35+5 Council members, 19 are new, including the partners in the unity process.

Diversity is one of the primary efforts focused at EPDP congresses although the success has been slow. For instance, the recent unity congress was attended 14 women delegates of whom 8 were elected to the leadership.

EPDP and Its Nominating Committee:

At least since its founding ten years back, the EPDP has the method of designating a Nomination Committee which strives to have the participation of all party members in selecting those who can be preseted as leadership candidates in party congresses. As the chairman of this body for the 3rd and Unity Congress, Gherezghiher Tewolde  reported, 29 branches and 8 individuals at isloated locations actively participated in nominating CC candidates. The final count of candidates, including four added by the Congress itself, was 58. It was on this list approved by all members of both uniting sides that the Unity Congress voted and elected the 35 CC members and five reserve members.

The Unityf Congress also expanded and upgraded the mandate of the Nominating Committees of the future to be active at all party structures, including zons and branches. The Nominating Committees shall have the power of presenting final list of candidates to party leadership at all levels, both for the legislative and executive branches. This advanced method of nominating candidates for leadership has been successfully used at party congresses in the Scandinavian region and other countries.

Printed below are the names of EPDP leadership members elected at the 3rd and Unity Congress in 2019:

Members of the EPDP Central Council, in alphabetical order, are: