Seyoum Harestai and Pals Gathered in Akriya 55 years Ago -- for Demonstration!! 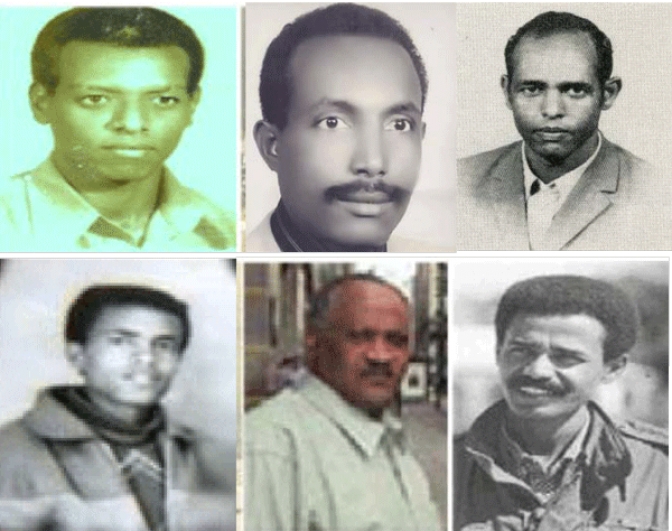 As we, old comrades-in-struggle of Patriot Seyoum Ogbamichael (Harestai) solemnly mark today, 17 December 2017, the 12th year  of his sudden and untimely passing away in a poorly-equipped Addis Ababa hospital, we do remember him for so many vividly memorable deeds and events, some of them resonating well with the Akriya of 31 October 2017. Martyr Seyoum was present with his schoolmates at a meeting of student demonstrators in Akriya 55 years ago!! And, ironically, those schoolmates of Seyoum included Eritrea's autocrat, Isaias Afeworki, who is today against everything that his generation dreamt of.

As every genuine patriot worth his/her salt would confirm it - and forgetting the bla bla of revisionists of history and facts - Akriya was always a hotbed  of nationalist politics inside Asmara, and a hiding place for  freedom fighters. Even Martyr Seyoum Harestai  spent a couple of nights in an ELF urban hideout rented inside Akriya in August 1965 upon his (and Woldedawit Temesghen's) return to the city to organize people. (This writer, who attended the Mai Anbessa meeting of  55 years ago, also had the honour of spending a night with the two ELF fighters in Akriya precisely 52 years ago). Hajji Mussa M. Nur, co-organizer with Martyr Tuku Yihdego and group of the ELM/Mahber-Shewate demonstration over a year earlier, and who provided shelter and logistics to heroic Saeed Hussein and his ELF Fedayeen team for the successful airport operation of 1963, was for sure in Asmara/Akriya in May 1962 and was no doubt proud of what the young students were doing. One would hope he will survive the PFDJ prison of today and tell us how he would compare the 31 October 2017 demonstration with the demonstration of May 1962!

Sadly, we are in a period forcing one to say with absolute certainty that our Asmara of the 1960s was better in many ways than Isaias Afeworki's Asmara of 2017 where a 93-year-old grandfather, Hajji Mussa, is incarcerated simply because his speech allegedly "incited" students to try to demonstrate in a nation that has been obliged to delete the word "demonstration" from its dictionary.

For the sake of the new generation that may know very little about Seyoum Harestai and his era of student militancy, who are a tiny minority today, I will write a few more lines about who he was and why he was at that the Mai Anbessa/Akriya meeting of students way back in May 1962!!

Seyoum Ogbamichael, one of Eritrea's strong-willed generation of freedom fighters, died on 17 December 2005 at the age of 59 reportedly of heart failure while serving as chairman of the Eritrean Liberation Front - Revolutionary Council (ELF-RC) and while discussing issues related to the formation of the present-day EPDP. Seyoum joined the armed struggle in March 1965 following a big student demonstration and after six months returned to Asmara clandestinely to give organizational shape to  urban sympathizer of the nationalist cause. On 31 August 1965, Seyoum and Woldedawit were arrested by the Ethiopian security while meeting people in a hiding place near Kidane Mihret at a tailor's shop of a son of Akriya, Siraj Ahmed, the martyr of Barentu in 1978.

Between their arrest in August 1965 and February 1975, Seyoum and Woldedawit spent ten years in prison until the ELF liberated them together with other 1,000 Adi Qualla prisoners. Seyoum was at one time chairman of the General Union of Eritrean Peasants during which he led ELF's land distribution plan to landless peasants, and thus earned the nick-name of "Seyoum Harestai." Needless to say, he was among those patriots who were denied  the return back home after liberation in 1991. When he died while on mission in Addis, his remains were brought to Europe for burial in the Netherlands.

Now Back to the Story of Demonstrations..

In Eritrea's pre-liberation era, what became impossible after 1991 was to some extent possible and safe. During Emperor Haile Selassie's reign in the 1960s, people did not face what EPLF freedom fighters faced in 1993 when they  asked for minimum rights for daily survival. Student protesters in the 1960s were not shot at or killed like what happened to the disabled EPLF veterans in 1994 for voicing for attention and minimum care. Nor were prisoners of that era condemned to "detention until death", as UN's Sheila Keetharuth would put it, bringing to one's mind the situation of G-11 prisoners and many of their likes who are languishing in regime dungeons for decades without a day at court.

Ethiopia's or any alien occupier's abuses and absolute denial of rights could have been considered normal, and not normal by a government of independent Eritrea. But PFDJ's lawless Eritrea is not a normal state. As noted, PFDJ is against almost everything that Seyoum Harestai and his generation's demonstrators stood for.

Student demonstrations were frequent in the Asmara of the '60s, but those demonstrators did not at anytime face death intimidations in the form of massive live gunshots as what happened on 31 October 2017 for very simple demands: the right to continue their normal school life started way back in 1967.

As my references show, the Eritrean Assembly was to meet in the third week of May 1962 to resume discussion started the previous year about one 1 million birr grant by the Emperor to cover a deficit in the Eritrean Government budget of 18 million birr for the year 1960/61. Some members of the assembly, the like of Misghina Gebrezghi and Estifanos of (Decamere), were rejecting the Emperor's grant. They were arguing that Ethiopia had to pay to the Eritrean Government the sum of 72 million birr  as unpaid arrears in  the form of customs and federal levies. Seyoum Harestai and schoolmates in the then Prince Mekonnen Secondary School believed and hoped - understandably, quite naively - that their demonstration during the Assembly's meeting would influence the 68 Eritrean legislators towards changing the status of Eritrea, including the return of young students' favourite Blue Flag that was lowered down in the autumn of 1958.

They were big, big demands by student demonstrators! Yet, no live shots were directed to intimidate Seyoum and his co-demonstrators of 23 May 1962 who passed running near the Eritrean Assembly building in the then  'combishtato' (Campo Citato),  singing 'we ask freedom, help us' - Tigrilgna:

Again, unlike what happened on 31 October 2017, there was no single gunshot heard that day 55 years ago except the threats of horse-riding police (Bolis Abay) carrying black rubber sticks. Some students were, for sure arrested, but the rest of them were scattered to northern directions, up to Akria and Biet Giorghis.

The issue for the next day's demonstration was the demand for the release of detained students. To organize it, students agreed to meet at short distance north of Akriya.  We later learned that the location of the meeting place was called Mai Anbessa.

My classmate Seyoum and I were among those who attended that meeting at which a few students made "speeches" encouraging each other against the police threats and their use of the rubber batons. I vividly recall that one of the speakers at Mai Anbessa  was a girl by the name of Minnia (whose name I retained for always because she carried the name of my sister). Seyoum, the latter-day eloquent orator, was not among the speakers; instead, it was me, whose Tigrigna was still Kerenite, that counted among those who said something  related to the demonstration. After a while, policemen were seen heading towards the meeting place brandishing their rubble sticks - no guns!! For sure, there were police beatings. Many took shelter in Akriya homes while others continued the run towards city centre, making sort of a successful second-day "running demonstration",  and partly achieving  the objective of Mai Anbessa gathering. On the fourth day (or may be the fifth day), all students previously detained were released.

Naturally, the May 1962 demonstration did not bring immediate changes - and of course no restoration of the Blue Flag ... kkkkk .... yet, that event sent its big message across the land!!

Together with the student demonstrations of those years, including the remarkable March 1965 demonstration in the city and later beyond it, the May 1962 chant of demonstrators calling the people for action - Natsinet Delina, Hagizuna -  was gradually received well and influenced many citizens' nationalist awareness. Young students started joining the liberation struggle, as Seyoum and Woldedawit did in early 1965.

They say that no one can stop an idea whose time has come. A momentous start or re-start can be initiated by anyone, anywhere - say by Seyoum and his schoolmates in  May 1962, or by the young Akriya boys and girls of 31 October 2017 from Ustaz Beshir Private School.

Today's call from Ustaz Beshir School is Harnet Delina, Hagizuna. And it is  loud and clear. This renewed message for action will  gradually but surely reach every corner of the nation, including Eritrea's hapless diaspora dispersed all over the globe. This new momentum from student demonstrators in Asmara will hopefully realize the much deferred dreams of so many Eritrean generations.

May your soul rest in peace, Seyoum, and may Hajji Mussa and co-prisoners survive their ordeal in PFDJ prisons and be able to see the realization of the deferred dreams of our countless martyrs, both fighters and civilians!!