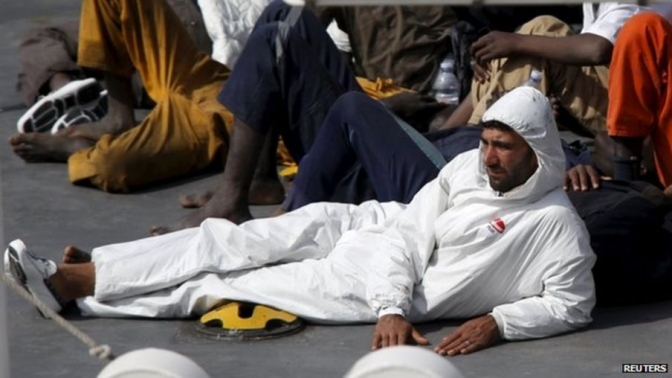 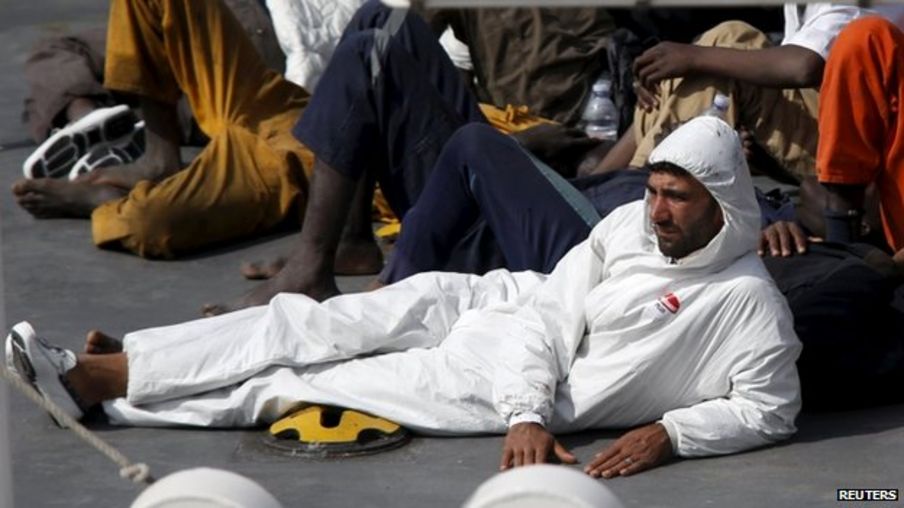 Prosecutors in Italy say the captain, who survived and faces multiple homicide charges, crashed the boat by mistake against a merchant rescue ship.

The capsize is the deadliest recorded in the Mediterranean, the UN says.

The International Organisation for Migration (IOM) says deaths in 2015 are 30 times higher than the same period last year and could rise to 30,000.

The 28 survivors of the weekend capsize arrived in Catania, Sicily, late on Monday.

More than a dozen survivors of the weekend shipwreck are being guarded in a house inside the Mineo migrant centre.

They've become the most important witnesses in an official criminal investigation into the wreck of their boat. Italian officials instructed us not to approach or speak to them.

After midday the survivors came out of the house and were escorted the few steps to a waiting minibus. The survivors - all young men - boarded the bus in single file and in silence.

One of them sat next to the window. I caught his eye and signalled a thumbs up or thumbs down sign as a question. He replied with a thumbs up - and then broke out into a smile.

The survivors were then driven a short distance to the dining hall, where they were served a lunch of pasta, rice, chicken and vegetables. They ate in silence.

Capt Malek was accused of causing a shipwreck, multiple first degree homicides and being accomplice to clandestine immigration. Mr Bikhit was accused only of the third charge.

The charges on both men have yet to be formally laid by a judge. The pair will appear in court on Friday.

The Italian prosecutors said there appeared to be two causes of the capsize. 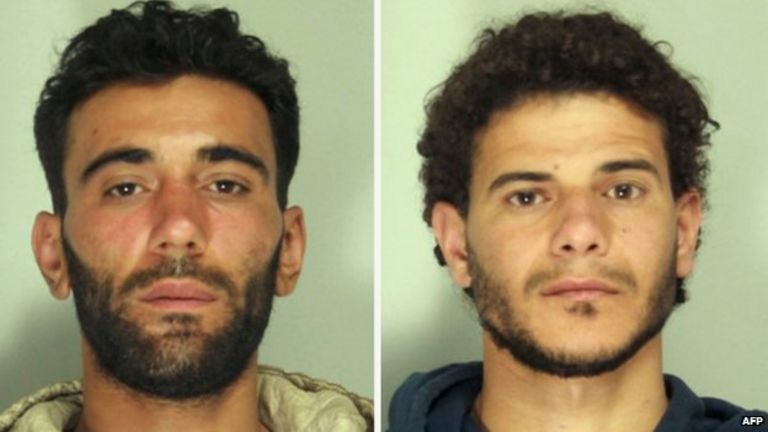 Malek (left) and Bikhit will appear in court in Catania, Sicily, on Friday

They said the migrant boat captain had tried to come alongside the rescue vessel and "accidentally caused the small fishing boat to collide with the bigger merchant ship".

The second cause was the "overcrowding of the fishing boat, so the boat was tipped off balance by the wrong manoeuvre, causing the migrants on board to shift. It then capsized".

Chief prosecutor Giovanni Salvi said the huge death toll was as a result of so many migrants being locked below on the three-deck boat. 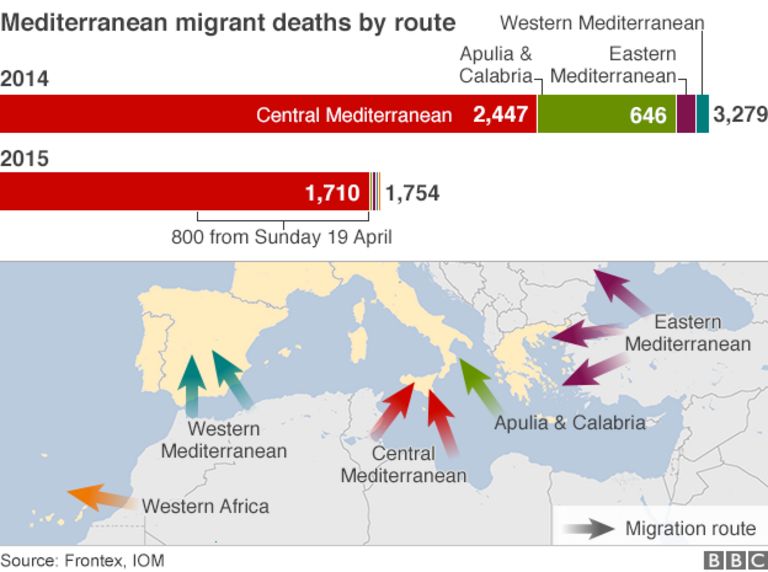 The prosecutors said it appeared the merchant vessel, the Portuguese ship King Jacob, was not to blame.

The IOM's Flavio Di Giacomo said the survivors were "very tired, very shocked" when they arrived in Catania.

Adrian Edwards, a spokesman for the UN refugee agency, said it had interviewed most of the 28.

He said about 350 on board were believed to be Eritreans, with refugees from other nations including Syria, Somalia, Sierra Leone, Mali, Senegal, Gambia, Ivory Coast, Ethiopia and Bangladesh.The British aunt of one of those feared dead, Baboucarr Ceesay, a promising footballer from The Gambia, told the BBC the traffickers "must be held to account".

Jessica Sey from Gloucestershire said her 21-year-old nephew's family "will never get justice" and more must be done to educate migrants of the risks.

IOM spokesman Joel Millman told reporters in Geneva: "The 2015 death toll now is more than 30 times last year's total at this date... when just 56 deaths of migrants had been reported on the Mediterranean.

"IOM now fears the 2014 total of 3,279 migrant [deaths] on the Mediterranean may be surpassed this year in a matter of weeks, and could well top 30,000 by the end of the year, based on the current death toll. It could actually be even higher."

Separately in Greece, two Syrian men rescued from a vessel which ran aground off Rhodes on Monday, killing three of about 90 migrants on board, will face charges linked to illegal transportation.

The charges came after the EU set out a package of measures to try to ease the migrant crisis in the Mediterranean.

They include an increase in the financial resources of Frontex, the border agency runs the EU's Mediterranean rescue service Triton, and an extension of Triton's operational area.

The EU had been criticised over the scope of Triton, which replaced the larger Italian operation Mare Nostrum at the end of last year.

On Tuesday, UK PM David Cameron said it was right to extend the rescue efforts and that Britain would contribute.

There will also be a new campaign to destroy traffickers' boats.

An emergency EU leaders' summit on the migrant issue will be held on Thursday.