Oromo regional state security authorities link the gunmen to militant wing of Oromo Liberation Front (it is also called SHANE in the region) but no parties responsible for the attack is in police custody so far. 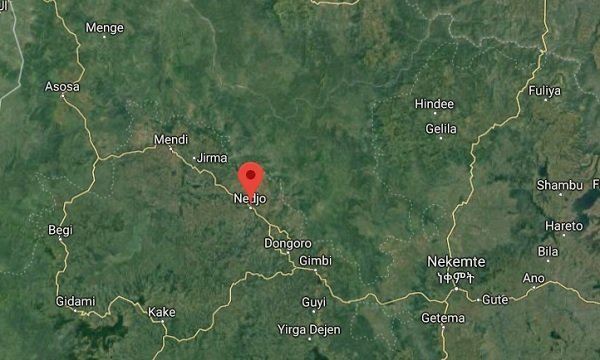 Two of the victims are foreigners – Japanese and an Indian – according to a report by DW Amharic service which cited sources from the area.

And all the victims are employees of a company licensed; by the Federal government of Ethiopia, to undertake copper mining in the area, reported FanaBC citing Ministry of Petroleum and Mining. Some of them were management staff.

The vehicle carrying the deceased was traveling from Mendi to Tolla Waqo when the gunmen opened fire in Humna Waqeyo, about 5 kilometers from Nedjo town.

The vehicle was in a blaze after it was hit with grenade explosion following the death of the five people who were in it. When law enforcement unites arrive in area, and it is unclear as to when they arrived, they found about 56 bullets, according to a report by FanaBC.

On Tuesday, DW Amharic cited Nedjo town communication officer, Tolera Suki, to report that bodies are in Nedjo hospital. But they could not be identified for they are disfigured, according to the report.

A militant wing of OLF has been operating in the region for many months now. In January 2019, the group robbed 17 bank branches (both private and state banks) in a span of two days.

The Federal government deployed armed forces to the region and there were claims of improved security situation thereafter.

In May 2018, Dagonte Ethiopia cement general manager, Deep Kamra, was killed along with his secretary, among others, in Adaberga district, Oromo region, about 85 kilometers west of the capital Addis Ababa.

Prime Minister Abiy’s government has been criticized in connection with the way it handled the militant group.

Tweet
Last modified on Wednesday, 20 March 2019 07:12
More in this category: « Human rights violations in Eritrea are as bad as ever Ethiopia, Eritrea To Sign EU-Sponsored Road Rebuilding Deal In Coming Months - Addis Ababa »
back to top