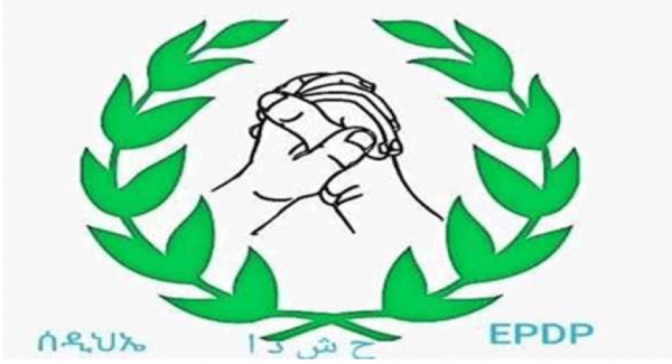 Convened under the slogan: “We Struggle for Constitutional Governance, Peace, Justice and Prosperity,” the 3rd and Unity Congress of the Eritrean People’s Democratic Party (EPDP) and the Eritrean National Salvation/Hidri was held between 29 and 1 August 2019 in Wiesbaden, Germany. It was attended by democratically mandated delegates representing total memberships of the sister organizations residing in different parts of the world. Those delegates who could not make it to Germany were given in advance the opportunity of contributing to the outcomes of the congress.

The congress was convening at a time when the converging organizations had experienced exceptional internal and external situations. The event came at the culmination of a year-long dialogue between the sister organizations, thus making it a historic undertaking. Externally, the preceding one-year period was influenced by dramatic changes in the Ethio-Eritrean relations ending the no-war-no-peace stance and further exposing the ugly face of the Eritrean regime. These developments, which also caused wider relationships of regional forces, added heat to the momentum of the struggle for change thus making the congress another special Eritrean event.

The congress scrutinized at the outset the process undertaken in drafting documents submitted by the preparatory committee, and heard detailed explanations by  both the outgoing chairmen about the long background of the sister organizations. On the basis of these presentations, the congress focused on strategic issues that required top priority and reached necessary conclusions.

At this crucial juncture of the Eritrean struggle for a brighter future in democratic governance, it was deemed inescapable to take stock of regional and international factors affecting our situation both in the short- and long-terms. The congress examined and deeply deplored the unholy and illegitimate alliances forged by the Eritrean dictator with the sole aim of prolonging his and his narrow clique’s stay in power. Among other worrisome actions of the one-man dictatorship that lacked transparency and went contrary to the best interests of the Eritrean people included the intervention in Yemen and the apparent lease of Eritrean territory to alien forces.

The congress also remembered with deep sorrow the tragic death in the Mediterranean Sea earlier on 25 July of so many children and mothers, many of the Eritrean refugees, and expressed its deep sadness and sent sympathies and condolence to families and friends of the victims.

The congress found it easy to overcome seemingly difficult issues due  earnest work  done by each side to resolve all outstanding issues prior to the start of this successful event.

Following the adoption of both the political programme and constitution that will guide the unified party for the next four years, the congress also discussed and approved political resolutions that touched upon:

The congress made a strong call on all concerned Eritrean formations to work in unison towards realizing the lofty aims presented in unified EPDP’s political resolutions. Likewise, the congress urged each and every Eritrean political organization and civic movement to come out of futile bickering and related weaknesses of the past and start to complement each other in the struggle for creating a better common future.

The congress fully recognized the failure in the past of the Eritrean political formations to measure up to the expectations of the people by creating a common voice in the struggle. As such, the congress boldly asked apologies to the Eritrean people and confirmed its commitment to repay this debt of the opposition camp by transforming our  unified EPDP to an instrument of unity and common platform for effective struggle.

In concluding its four-day proceedings, the congress elected in a democratic manner a 35-person Central Council with five reserve members based on the selection process of leadership candidates conducted by a 9-person Nominating Committee which was on assignment during the past year. The election outcome relatively reflects the diversity in Eritrea.

The unification congress is being following by a public event, the annual Eritrea Festival in Frankfurt.

“We Struggle for Constitutional Governance, Peace, Justice and Prosperity”