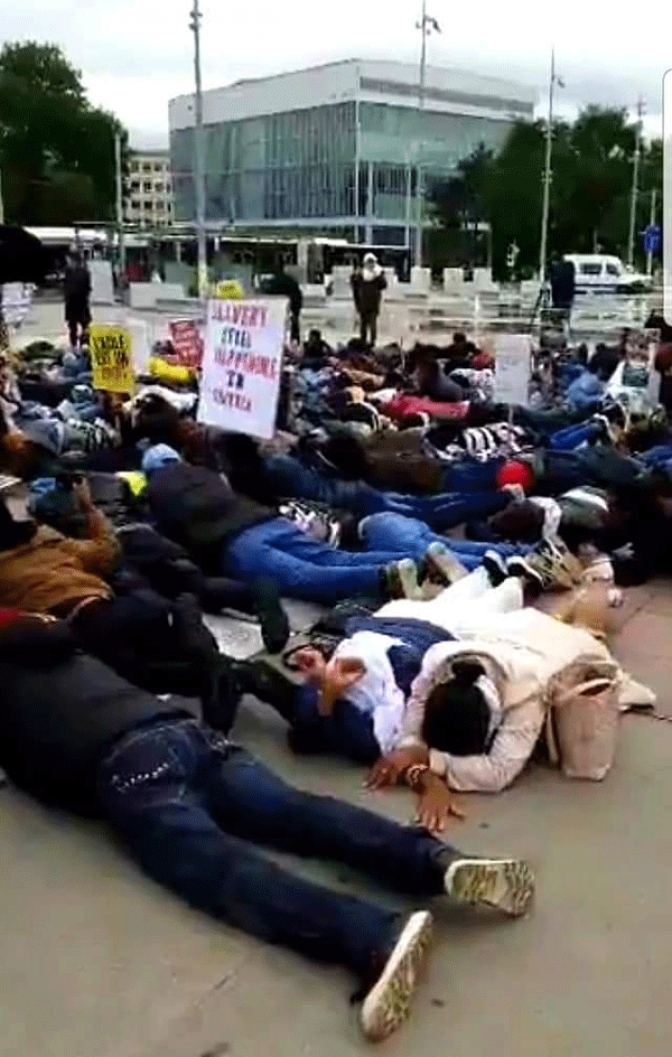 A demonstration organized in Geneva on Friday, 4 October, in support of Eritrean and other refugees and migrants stranded in dangerous Libya was addressed by two leading Swiss politicians who expressed “unreserved support” to the calls of the demonstrators on Europe to stop shutting its gates to people in distress and also cease complicity with traffickers, Libyan  criminal gangs, including the authorities.

Both Mr. Carlo Sommaruga, President of the Foreign Relations Commission for social democrats in the Swiss National Assembly in Bern, and Ms Jocelyn Haller, renowned  social justice activist and member of Parliament  representing the Left Alliance of Geneva, pledged to convey the message of Eritrean justice seekers to higher decision-making bodies in Switzerland.

The demonstrators handed over strongly-worded 4-page  letter to the UN Human Rights Commissioner, Ms Michele Bachelet, telling her the humanly intolerable conditions under which the refugees in Libya, including those in the insecure UNHCR camps, are living and urged the Commissioner to ask the UN Human Rights Council, currently in session in Geneva, to recommend an action at international level. The letter further revealed that the stranded refugees in Libya are living with “corpses” and that social media messages from the camps show profoundly distressing images of brutality including extreme forms of torture and rape.

They demonstrators asked European countries to review and change their resettlement strategies and, most urgently, to reactive the Search and Rescue Operations that were started soon after the Lampedusa tragedy of 3 October 2013 that claimed over 360 Eritrean lives.

Taking part in the quickly organized demonstration were over 300 persons, mostly young, who came from several regions of Germany, Italy and Swiss cantons. EPDP Central Council member Feven Gideon was among the most active leaders of the event.