Seven Eritrea internationals who have been in hiding in Uganda for more than six months fear being captured and sent home “as traitors” if they are not granted asylum.

In December 2019 they were part of the Eritrea team that reached the final of the Cecafa Senior Challenge Cup – an annual tournament for teams from east Africa – for the first time. They were due to return home on a flight with the rest of the squad after a 3-0 defeat by the hosts Uganda but Abiel Oqbay, Isaias Abraham, Ismail Sultan, Eyob Girmay, Robel Kidane, Yosief Mebrahtu and Filimon Semere escaped and have since been on the run. 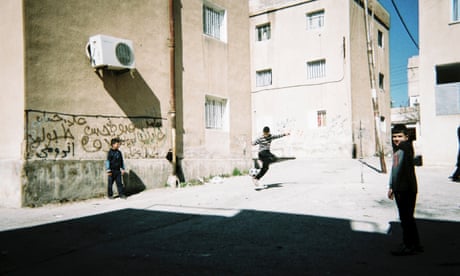 The Ugandan authorities, having initially co-operated with the Eritrean embassy in Kampala in the search for the players, issued them with asylum registration cards in January before a proposed interview with the UN High Commissioner for Refugees that has yet to materialise.

“In January they told us to be patient because if the police opened the procedure our cases will move on smoothly,” said Oqbay. “Then in May they called us back and said they can’t help us at the moment. We don’t know what to do, because we don’t have many resources to move forward … we have been eating only once a day.”

Since 2009 it is estimated that more than 50 players have used their status as international footballers to escape the oppressive regime of the Eritrean president Isaias Afwerki, which imposes lifetime military service on many subjects and bans groups of more than two people congregating in public places. A recent report by the Norwegian Refugee Council outlined concerns that asylum seekers in Uganda often face long delays in their applications given the fact that more than 1.7 million refugees were expected in the country this year.

The coronavirus pandemic has made the situation even more desperate, and George Ghebreslassie – a senior member of the America Team for Displaced Eritreans, which has been helping the players in Uganda – has warned that the players are still at risk of being captured if the UNHCR does not intervene.

“As soon as I talked to them, I was terrified to hear they were in Uganda without any protection,” Ghebreslassie said. “Uganda is a hub for the supporters of the Eritrean regime and some people are looking for the players. If they catch them they will punish them so they can serve as an example of how the regime treats who they consider as traitors.

“Something within UNHCR doesn’t work; it seems they don’t realise the seriousness of the situation. I talked to a woman there, but she didn’t follow up the case. The players need to be moved to a safer place under UN protection as happened to their youngest colleagues some months earlier.”

The Guardian has sought comment from UNHCR but received no response.

In January, the Guardian spoke to Mewael Yosief – one of the four players from the country’s under-20 side who fled after reaching the Cecafa Under-20 Challenge Cup semi-final in Uganda a few months earlier. They are awaiting the result of their asylum application but Kimberley Motley, the American attorney who is following their case, said that was a slow process. 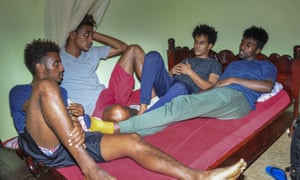 “They have been interviewed in order to see if they qualify – which they do,” she said. “It is up to a country to invite them, but the Covid-19 pandemic has complicated things. Countries aren’t really accepting refugees now.”

Oqbay and his teammates spent their first weeks in Uganda in Kampala, where they were moving from place to place to avoid capture, before in February going to a more remote location thanks to the help of Ghebreslassie’s organisation, which is based in Pennsylvania. Despite several attempts by Giulia Tranchina – an Italian immigration lawyer based in London – to advance their case with UNHCR for Uganda, there has been no progress.

“We are aware we have to wait,” Oqbay said. “We love football so much and what we want is just to be safe in a free country where we can continue playing.”