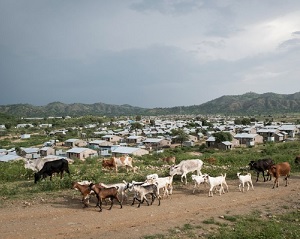 March 8, 2020 (Ezega.com) -- The future for 18,000 Eritrean migrants in Hintsats refugee camp is uncertain as Ethiopian authorities announced the decision to shut down the seven-year-old refugee camp in Tigray region of northern Ethiopia.

The Tigray regional government warned that the refugees will face punishments if they are forced to return to their home country.

The Ethiopian government did not disclose why it has decided to close the camps in Tigray contrary to its international obligations and for which it was praised by world bodies for so long. Observers believe this has to do with regional politics between the governments in Addis Ababa and Asmara and to satisfy demands by the Eritrean regime.

Ezega.com learned that the refugees were told by the Ethiopian Administration for Refugees and Returnees Affairs (ARRA) to evacuate in ten days and move to another camp.

The Hintsats refugee camp is located near Shire town of Tigray region. It is one of the six refugee camps, sheltering Eritrean migrants and asylum seekers.

Last year, the government of Ethiopia announced plans to close all 27 refugee camps in the country over the next 10 years and integrate the migrants into local communities.

Ethiopia hosts more than 850,000 refugees from South Sudan, Somalia, Yemen and Eritrea, and shelters more refugees than all but one African country, Uganda.

Thousands of young Eritrean migrants have been flooding Ethiopia fleeing a combination of political-economic conditions that include general lack of freedom, conscription and poor economy. Reports reveal that Eritrean migrants largely unaccompanied continue to enter Ethiopia's Mai-Aini and Hintsats refugee camps in journeys full of risks.

The Tigray regional government and UNHCR said they do not know if the camp would be closed during a discussion with representatives of the refugees.

The refugees told local media that the decision on the closure of the refugee camp comes after an agreement was reached between Addis Ababa and Asmara.

The Eritrean government wants to cut flow of Eritrean migrants to Hintsats refugee camp which is located near the Ethio-Eritrean border.

Deputy President of the Tigray regional state Debretsion Gebremichael recently said the central government was conspiring to shut down the Hintsats refugee camp. “No force can close the refugee camps in Tigray region, Deberetsion said during the 45th founding anniversary of TPLF.

Following the July 2018 peace agreement, the Ethiopian and Eritrean governments reopened crossing points on their shared border on September 11. According to the Shire District administration, up to 15 000 Eritreans crossed into Ethiopia, some to visit relatives or to buy goods, and many to stay. The opening of the crossing points however did not stay long - not more than two months.

According to UNHCR, the average daily arrival rate of Eritrean migrants has increased, bringing the total number of Eritrean refugees in Ethiopia to 175 000, a large proportion of whom are unaccompanied minors.