The United Nations has called for an independent inquiry into the bombing of a Libyan migrant detention centre that left at least 44 dead and more than 130 severely injured, describing the attack as “a war crime and odious bloody carnage”.

The detention centre east of Tripoli was housing more than 610 people when it was hit by two airstrikes. Libya’s UN-recognised Government of National Accord (GNA) and the Italian interior minister, Matteo Salvini, blamed the bombing on the air force of Khalifa Haftar.

The GNA has been defending Tripoli from an assault launched by Haftar’s Libyan National Army (LNA) on 4 April that has left hundreds of people dead.

Gen Khaled el-Mahjoub, a spokesman for the LNA, denied targeting the detention centre, saying it was the militia camp in the Tajoura neighborhood that was the target. He did not deny, however, that the migrant detention centre was hit. “We didn’t give orders to target the shelter,” he said.

The death toll, which includes many women and children, represents one of the largest single losses of civilian life since the civil war in 2011.

The air raid, involving two missiles, occurred in the early hours of Wednesday morning and left the detention centre a charred ruin. The LNA had on Monday warned that it was stepping up air raids on the capital in response to recent military reverses.

The commander of LNA’s air force operations room, Maj Gen Mohamed Manfour, had warned that as part of “exhausting all traditional means” to capture Tripoli, LNA would conduct “strong and decisive airstrikes” against select targets.

The UN refugee agency had previously called for people to be removed from the detention centre in Tajoura, expressing fears that they were likely to be victims of air raids being mounted by Haftar’s air force. The detention centre is close to a military supply depot for militia working to protect the GNA.

Condemning the destruction, the UN special envoy for Libya, Ghassan Salamé, said: “This attack clearly could constitute a war crime, as it killed by surprise innocent people whose dire conditions forced them to be in that shelter. The absurdity of this ongoing war today has led this odious bloody carnage to its most hideous and most tragic consequences.”

The international outcry, including an emergency closed session of the UN security council, will put pressure on Haftar’s backers, notably the United Arab Emirates and Egypt, to withdraw their support, or at least demand an end to the nightly air raids.

The UAE is already facing a threat of a US congressional ban on US arms sales amid claims, denied by the UAE, that arms supplied by the US have been transferred to Haftar for his assault on Tripoli. The UN has imposed an arms embargo on Libya.

The multiple calls for an inquiry into the attack on the detention centre were led by the UN secretary general, the African Union and the European Union, and supported by individual states including Germany, France, Turkey, Qatar and the UK.

Salvini, criticised across Europe for his refusal to allow migrant ships from Libya to dock in Italy, was the most forthright, saying: “Haftar is responsible for a criminal attack … I hope there is no one left, and I do not mention the French, who for economic and commercial reasons support an attack on civilian targets.” Italy has repeatedly accused France of covertly helping Haftar, and his claim to be leading a fight against Islamists and terror.

The EU defended itself from claims that it was responsible for the plight of the migrants in Libya by backing Libyan coastguard efforts to deter the migrants from reaching Europe.

Calling for an independent investigation, the EU said: “We have sought to evacuate refugees and migrants from the detention centres near the frontline. Where possible, we have enabled them to find safety outside Libya – these efforts must continue and be stepped up urgently.

“Unfortunately, many more are at risk and should be transferred to safe places swiftly so they can receive assistance and be evacuated.” 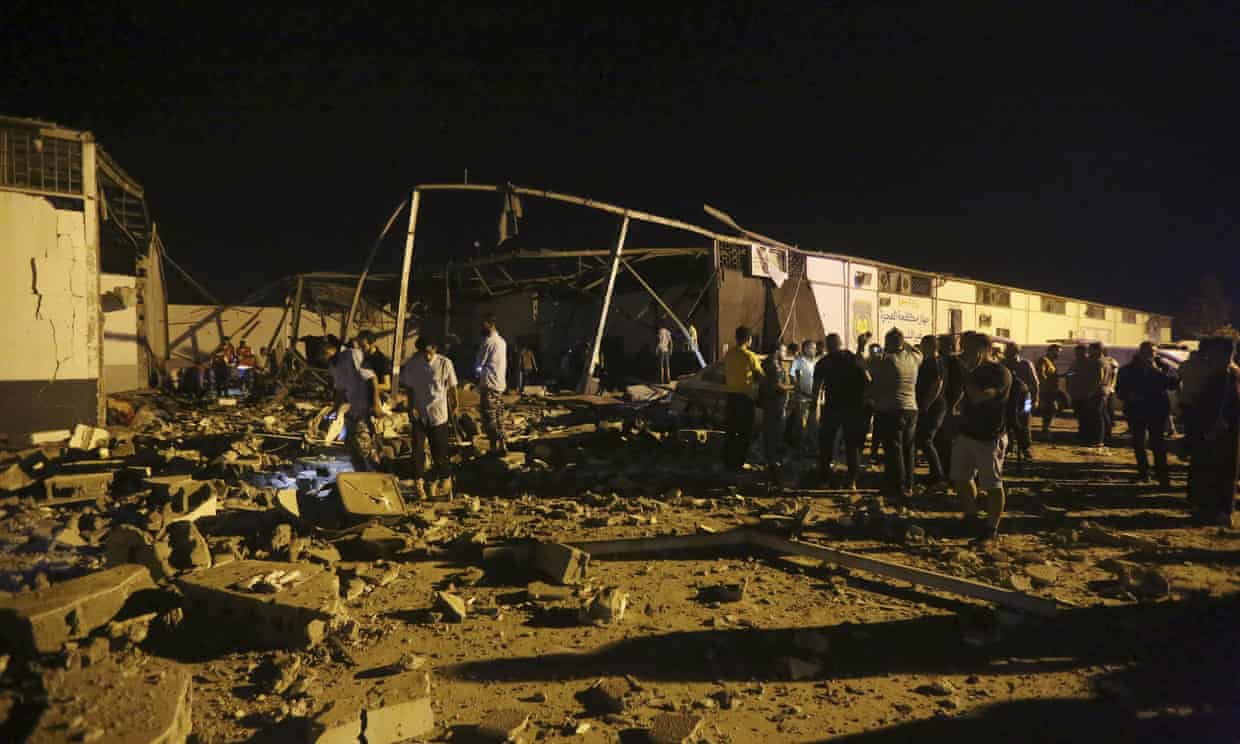 Haftar’s Libyan National Army said the attack may have been committed by the GNA missiles, a claim that led some countries to hold back from identifying LNA culpability, at least until an inquiry was complete.

In a statement, the GNA denounced the attack as a “heinous crime” and blamed it on the “war criminal Khalifa Haftar”. It accused pro-Haftar forces of having carried out a “premeditated” and “precise” attack on the detention centre.

The NGO Exodus claimed that Haftar’s forces were responsible for the raid, but said: “The bombardment, however criminal, is due to the equally criminal practice implemented by GNA forces of Fayez al-Sarraj to use migrants as human shields, hiding militias and armaments inside detention centres crowded with migrants.”

The group said it had been warning European leaders for two months that people in the detention centres were in danger from the air raids, but that its pleas had been met only with “grim political calculation”.

Tweet
Last modified on Thursday, 04 July 2019 08:04
More in this category: « Eritrea is a human rights ‘priority country’ for the Britain UNHCR appeals to Eritrea over refugee camp closure »
back to top