Democracy according to Eritrea's Afwerki, then and now

On the 27th anniversary of Eritrea's independence, Isaias Afwerki should remember what he once said about democracy. 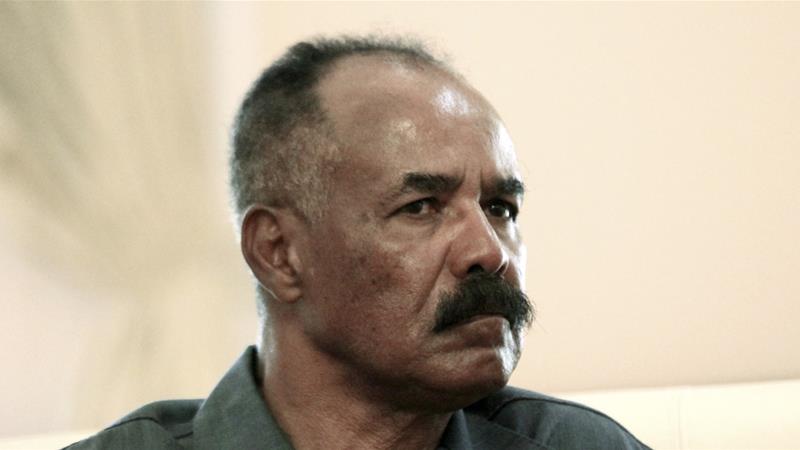 Isaias Afwerki is the first President of Eritrea, a position he has held since its independence in 1993 [Reuters]

Today marks the 27th anniversary of Eritrea's independence, hard-won after a 30-year war with Ethiopia. On this day, as we rightfully celebrate, we should also reflect on the overall state of the country. To do this, there is no better way than looking back to a landmark speech Eritrea's first and only president, Isaias Afwerki, gave over two decades ago.

On September 8, 1997, in a public address at the Walton Park Conference in West Sussex, England, President Afwerki delivered profound remarks on democracy and the rule of law in a speech titled "Democracy in Africa: an African view."

In this address, the president listed six fundamental principles that he believes are the most essential pillars of a modern democracy, particularly in Africa:

1 - The right of a citizen to an equal share of natural resources, including access to basic necessities and protection from hunger and deprivation.

2 - The right to equal opportunity, including education and other services that are essential for personal development.

3 - The right to full respect and protection of one's dignity - as a human being, citizen and member of a community - without any discrimination on the basis of social status, religion, gender and race.

4 - The right to life, unhindered movement, and freedom of expression and opinion.

5 - The right for and the provision of, appropriate legal and institutional guarantees consisting of, among other things, a constitution and a judiciary.

6 - The right for and the provision of a responsible, transparent, and non-corrupt government to uphold the rule of law and defend the national interest.

Despite the progressive views expressed by the president in this speech, Eritrea has moved further and further away from democracy in the last two decades under his rule.

First of all, Eritrea is still being ruled without a constitution. After a three-year-long drafting process, the country's constitution was ratified in 1997, but it has not been implemented to this day.

Also, the country is still run by a single party - People's Front for Democracy and Justice - whose last congress convened over 20 years ago, in 1994. The last meeting of the national assembly, on the other hand, took place over 16 years ago, in January 2002.

The president, in his Independence Day address of 2014, promised that the country would draft another constitution. But four years on, it is clear that promise was yet another excuse to buy time and divert attention.

Let's examine whether Afwerki managed to adhere to any of the six fundamental principles of democracy that he mentioned in his landmark Walton Park Conference speech more than two decades ago.

On citizens' well-being and unhindered movement

In 1997, Afwerki advocated for the citizens' right to unrestricted movement. In today's Eritrea, however, the overall level of surveillance and control resembles the draconian measures taken in order to contain the plague epidemic in 17th-century Europe, as described by French philosopher Michel Foucault in his 1975 book "Discipline and Punish".

Today, Eritrean nationals are being forced to continuously prove their obedience to the regime, repeatedly inform the authorities of their whereabouts and seek permission to take part in even the most mundane activities.

Only after having the aforementioned clearances from all those entities can someone secure the daily coupon that would allow them to buy bread.

Movements of Eritrean citizens both within and outside the country are tightly controlled. Anyone five years and older can only travel out of the country under extraordinary circumstances, and only after completing a cumbersome process.

On equal protection before the law

For years, tens of thousands of Eritreans have been languishing in military-controlled dungeons across the country in the harshest conditions. Most of these "prisoners" have not been officially charged.

Some of them were imprisoned at the personal whims of their immediate commanders. In these innumerable military prisons, innocent prisoners are subjected to all types of torture and abuse on a daily basis.

Meanwhile, civilian courts have become powerless. Military commanders can reject the verdict of a civilian court if it displeases them or their associates.

In Eritrea, most of the ordinary disputes and accusations are resolved by military commanders and their "disciplinary committees" in underground military prison centres. However, more prominent cases are handled by the Special Court, run by military officers and operates under the president's office. In this court, the defendant does not have the right to appeal or to have a lawyer.

Over the years, journalists and former state officials  have been left to rot in secret prisons in deplorable conditions. More recently, school children, some as young as 12 years of age, have been kept in detention after a last year's rare protests in the capital.

On citizens enjoying an equal share of natural resources

In his 1997 address, President Afwerki rightly declared that nationals should have equal rights to their country's natural resources. Today, Eritrea's reality is exactly the opposite.

Despite the nation having more than 1,000km of sea coast, most Eritreans have never tasted fish. Seafood is a rarity, even in the port cities, because fishing has been outlawed.

Mining, on the other hand, has recently been booming in the country. At least 17 international mining and exploration companies have been granted licenses to work in Eritrea. Despite the hype and great expectations, apart from the president and his ruling-party clique, no one knows where the income generated through these licences is going.

The denial of resources extends to all other possible sectors in which the state encroaches on the private territory of citizens. In a country that cannot even produce toothpaste or tissue paper, private import and export businesses have been outlawed since 2003.

Only the organs of the ruling party are allowed to ration basic food items and run all of the country's legal and contraband businesses, including the black market.

Construction of houses has been banned in Eritrea since May 2006. The military has been busy demolishing houses built clandestinely since the ban.

Because of acute shortages in housing, rents have skyrocketed to a point where an unfurnished two-bedroom house in the capital would cost a minister's monthly salary. Instead of exploring lasting solutions, thestate tries to regulate rents, which only serves to fuel tensions between tenants and landlords.

In his 1997 address, President Afwerki underlined the importance and indispensability of "human dignity" within a democracy, yet his oppressive policies have stripped Eritrean citizens of any remnants of human dignity.

Since the summer of 2012, all civilians between the ages of 18 and 70 have been required to attend military training and guard government buildings at night. Even the country's most prominent and respected officials, including the president of the country's Supreme Court, are compelled to attend these military training sessions which are designed to humiliate and degrade.

At times, ministry employees are ordered to leave their homes to provide free labour for the state. President Afwerki personally supervises such work and assesses the levels of obedience of the labouring ministry employees.

Today, the humiliation of Eritrean citizens at the hands of the state is not limited to compulsory military training exercises or demands for free labour. President Afwerki uses various other mechanisms to intimidate and dehumanise his subordinates, including physical assault.

On freedom of expression and opinion

In his speech, President Afwerki also argued that freedom of expression is an essential pillar of a successful democracy. But since September 2001, all private media have been banned in Eritrea, and international journalists are not allowed  into the country.

State journalists, who routinely force-feed propaganda to the public, are not spared either. Even they go to their workplaces every single day with the gut-churning feeling that they may fall victim to an arbitrary arrest and fail to return to their homes in the evening.

Average citizens view the ministry of information not as a regulator of media but instead, as an oppressive national security office. As a majority of Eritreans are afraid to even to utter the name of the ministry out loud in any public place, most people refer it by its geographical location instead - "Forto".

Both in the state media and art production, Eritreans inside the country have total freedom, as long as they "choose" to praise the president and his rule. Otherwise, no.

Singers describe President Afwerki in their songs as the man who "compel[s] the sun to bow down, let alone humans". One supporter testified in March during an interview broadcast on national TV that Afwerki's touch can heal citizens of longtime ailments.

In his Walton Park Conference address, President Afwerki declared that the African continent has been held hostage by "an incredibly corrupt, short-sighted, tyrannical, and irresponsible political elite that has plundered public resources and national wealth while millions are relegated to acute poverty and misery".

Unfortunately, 20 years on, his past words have come to describe his current actions and the sad fate of the Eritrean people.

The views expressed in this article are the author's own and do not necessarily reflect Al Jazeera's editorial stance.