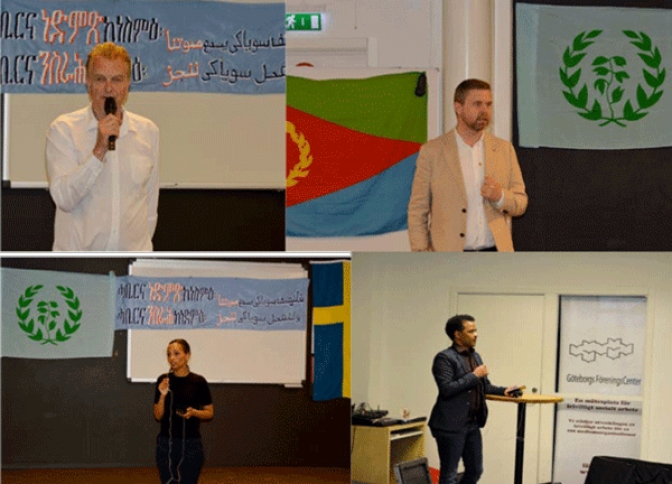 Speaking at an awareness seminar in the Swedish city of Gothenburg on 4 May 2019, the Honourable Johan Buser, member of the Swedish Parliament and a senior official of the Swedish Social Democratic Party, expressed his deep sadness about the unchanging human rights and political situation in Eritrea.

Mr. Johan Buser, who is chairman of the transport committee, said he will make efforts to again raise the problems of Eritrea and its people at the Swedish Parliament. Concerning the reception and  housing problems of Eritrean refugees in Gothenburg, he said promising contacts have been made with city authorities and other party structures in the region.

The educative event was organized by the Swedish-Eritrean Solidarity Association in Gothenburg and was held under the motto: “Let us voice in unison to be heard, and work jointly to be effective.”

The meeting was opened by introductory statements of the association president, Mr. Thomas Magnusson, and Mr. Zehaie Keleta, association board member. Adding colour to the opening session was a poetic rendition in Tigre language entitled ‘my country’ by Artist Mussa Nashih. Attending the event included two secretaries of the Mayor of Gothenburg, Mr. Ruben Maelstrom and Mr. Joseph Akarn, as well as the chairman of International Folk Skolan, Mr. Yoni Aderson.

Another key speaker at the awareness seminar was a young Eritrean lady, Milio Tekle, who is an integration expert and public relations advisor in the city council of Gothenburg. She presented an educational speech on social development and childcare of Eritrean families in Sweden today.

The awareness and solidarity gathering was concluded after a tea party with sweets and kitcha/bread prepared by Eritrean ladies and Somali friends. Also at the closing session, which was graced by Eritrean folkloric music, Artist Mussa Nashih presented another moving poem in Tigrigna about the plight of Eritrean refugees.