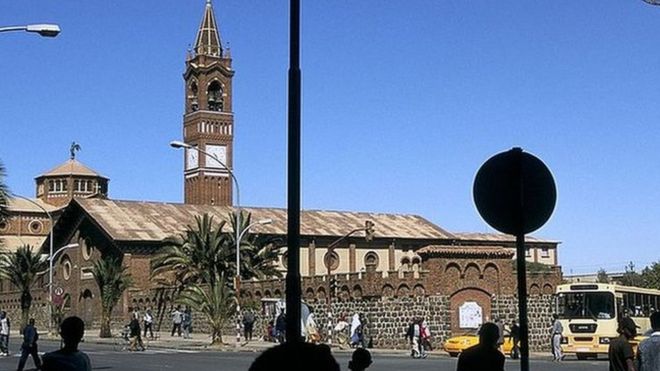 Eritrea's Roman Catholic Church has condemned the government in the one-party state for seizing and shutting all its health centres last week.

In a letter to the ministry of health, the Church said patients were ordered to go home, and soldiers were deployed to the centres to guard them.

The seizure of the buildings could not happen in a country where the rule of law existed, the letter added.

The government has not yet commented on the Church's claims.

Many analysts believe the government has closed down the health centres to retaliate against the Church for issuing a statement in April calling for reforms to stem the tide of migration to Europe, BBC Tigrinya's Teklemariam Bekit reports.

The Church ran 22 health centres, and their closure is likely to leave thousands of people, mostly mothers and their children in rural areas, without healthcare, our correspondent says.

The government also provides health services, but critics say they are less accessible and of a lower standard, he adds.

In the publicly released letter, the Church said the government's action was reminiscent of the former Marxist regime which used brute force in 1982 to bar access to convents, schools and health facilities.

Eritrea was part of Ethiopia at the time. It became an independent state in 1993, and has been under President Isaias Afwerki's rule ever since.

His critics accuse him of leading a repressive state, but his supporters deny this.

In its letter, the Church said the social services it provided to Eritreans could not be construed as an act of "opposing the government".

"The government can say it doesn't want the services of the Church, but asking for the property is not right," the letter added.

Roman Catholics make up about 4% of Eritrea's population.

The Church is only one of four religious groups allowed to operate in Eritrea, along with the Eritrean Orthodox, Evangelical Lutheran and Sunni Islam groups.

The government regards other religious groups as instruments of foreign governments.

In May, a UK-based rights group told the BBC that more than 30 Pentecostal Christians had been detained in Eritrea while they were praying in three different locations in the capital, Asmara.

"Security personnel continue to raid private homes where devotees of unrecognised religions meet for communal prayer. Repudiation of their religion is typically the price of release," campaign group Human Rights Watch said in a report released earlier this year.